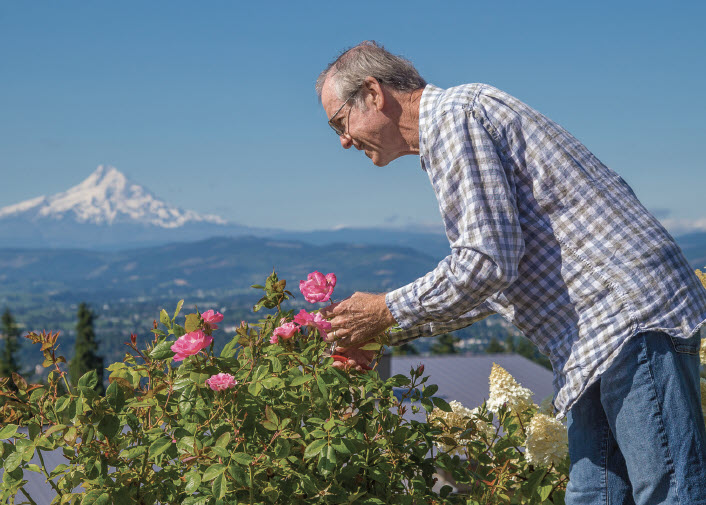 It was the Wednesday before Memorial Day when Bob Weisfield, a retired West District Court judge and Skyline Foundation board member, began feeling ill. Typically the perfect picture of health, it was unusual for Weisfield to not have energy. “I knew something wasn’t right. By Thursday, I developed a headache, fever, weakness and loss of appetite,” said Weisfield. “I thought I had a case of the flu.”

Weisfield made an appointment with his primary care physician, Alicia Giménez, M.D., at NorthShore Medical Group. After receiving an examination and consultation with Allen Labarge, M.D., it was determined the antibiotic he was taking might be the culprit. He was instructed to stop taking the drug to see if this alleviated his symptoms. “I didn’t heed the physician’s advice because it has been ingrained in me that I shouldn’t stop taking an antibiotic because the infection may come back resistant to the drug,” said Weisfield. “This proved to be detrimental to my health and looking back, I should have listened.”

Not listening turned out to be life threatening for Weisfield. After three days in bed without being functional and his temperature at a dangerous 102.8°, he found himself at Skyline Health’s Emergency Department. He was substantially dehydrated and his white blood cell count had bottomed out. “The ER staff saw me immediately and I knew I was in the best of hands,” said Weisfield. I trusted everyone around me to provide the highest quality of care and this is exactly what I received.”

After a battery of tests, the original diagnosis was confirmed – Weisfield had an allergic reaction to the antibiotic. He was admitted to the hospital and spent three days as an inpatient. With his white blood count so low, he required a cancer drug – which was located at another hospital – to boost his level. “It was amazing to see everyone pull together as a team to get me what I needed,” said Weisfield. “Skyline’s pharmacist, Amy Knowles, took time out of her vacation to order the drug, while another staff member drove to pick it up. Truly remarkable.”

“From the admitting staff to the clinicians to the person who cleaned my husband’s room, we were treated so well and everyone went out of their way to help him heal,” said Heather Weisfield. “At a very stressful time, our family was held up by the strength of others – it was wonderful to be so compassionately cared for.”

Today, Weisfield is back to his active life of yoga, walking and gardening, and continues his community service to Skyline. “My experience at Skyline was extremely positive,” he continued. “It’s comforting to know I have the option of staying in my hometown and receiving care from the best in the business.”

As a Skyline Foundation board member, Weisfield knows the importance of having health care close and personal. “It’s one of the reasons I serve on the board,” he said. “I believe we have the responsibility to be responsive to the changing needs of our community. It’s our job. Also, there’s a spot in my heart for Skyline. This hospital has been a part of my health and healing.”